Like many people, I have started learning about Software-Defined Networking and OpenFlow using Mininet, which is a great virtual environment to use. However, Mininet has some limitations, and I found myself looking for hardware alternatives.

This article describes how to build an OpenFlow lab environment that can be used for learning, research, or application development. The lab consists of four Zodiac-FX switches , a standard 8-port managed switch, and a computer. 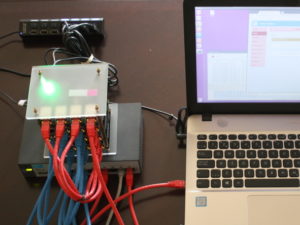 A typical SDN network includes OpenFlow switches, a controller (or more), and the computing nodes that connect to the switches and generate the traffic. A realistic lab environment should provide the ability to create some common network configurations and generate realistic traffic in the network. The low cost of the 4-port Zodic-FX switches offer the opportunity to use multiple of them to create a realistic topology using a reasonable budget.

The nodes needed for the lab, including the server running the controller are created as Linux virtual machines and containers (LXC). Containers behave much like virtual machines, but they include only the software components they need to operate rather than an entire operating system. This improves performance and reduces the memory requirements.

Figure 1 illustrates the lab infrastructure to be built. The lab consists of a PC connected to a standard 8-port layer-2 switch. The switch other ports are connected to the OpenFlow switches. Another two ports are used to connect to an external network (the home or school network).

This section deals with configuring the lab’s hardware switches and making the necessary Ethernet cable connections.

Refer to the managed switch documentation to configure the switch according to the following specifications (use Figure 2 as a reference):

Refer to the Zodiac-FX User’s Guide to configure the switches as follows: 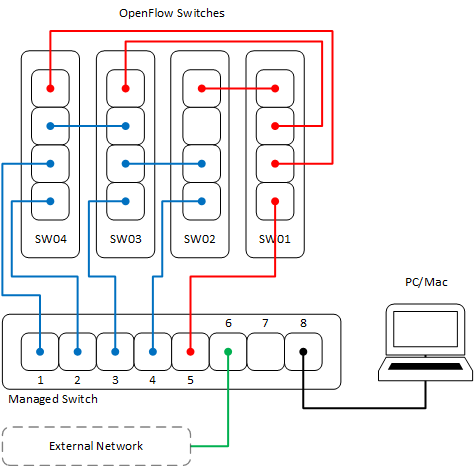 Finally, make all the cable connections as shown in Figure 3. The red links connect the OF controller to the controller ports on the switches while the blue links make up the datapath network topology. The managed switch separates the VLAN-tagged traffic from the virtual hosts on the PC/MAC into physical ports connecting to the corresponding  OF switches. The green link connects the PC/MAC to an external network (and the Internet) to be able to download and install the software required for this lab.

Of course, all these connections can be changed at your discretion and according to your lab experiment or research requirements.

If you have a computer running Linux as the primary OS, you can skip to the Linux setup section. I am using a PC running Windows 10, put you probably can use a Mac as well.

Some PC NICs strip VLAN headers by default. To enable them, follow this procedure.

I’ve noticed that the default setting is restored after some Windows updates, so you may want to do the above procedure after each update.

This article does not cover how install the virtualization software and use it to create the Linux VM. Please consult other documentations for this task.

By the end of this installation, the Linux VM should be able to obtain an IP address dynamically from DHCP on the external LAN. Otherwise, check the physical connections to make sure that:

Alternatively, configure a static IP address on your VM to be able to access the external network and the Internet.

This section deals with installing and configuring VLAN interfaces and Linux containers on the Linux VM (I will just call it VM from now on). The VM will act as a server that hosts the SDN controller. It will have two VLAN interfaces, one that connects to the OF switches and will represent the OF channel, the other will connect to the external network. The containers will be used to generate host  traffic and each will have its own VLAN interface.

The goal of this step is to create a bridge on the VM. The bridge connects all VLAN interfaces that will be created later.

Take note of the name of the Ethernet port on your VM (mine is ens33) and create a bridge br0 (or choose anther name):

Edit the file “/etc/network/interfaces” to automatically create the bridge at start-up and connect the physical interface to it.

Note: If DHCP is not enabled, add static IP address configuration to the text below.

Restart networking (or reboot the machine):

Verify that the bridge exists and test the connectivity to the external LAN again.

While you are connected to External LAN, complete the installation of the software listed in the Requirements section and any other software you may need.

We need to create two VLAN interfaces on the VM. VLAN 90 will be used to connect with the external network, and VLAN 80 will connect the VM to the OpenFlow network, which links the controller to the switches.

Begin by installing the VLAN module and loading it into the kernel.

Add VLAN 80 to the existing interface:

Assign an IP address to the new interface and start it:

Test the connectivity to the OF switches with ping. Now, packets from the VM will be tagged with VLAN 80 in their way to the managed switch and untagged at port 5. You can also use Wireshark to verify that ICMP packets are tagged.

Make the configuration permanent by loading the VLAN module at boot time.

Also, edit the “/etc/network/interface” to include the permanent configuration.

Adding VLAN 90 is not strictly required but it may be needed if you want to segregate the traffic of the VM from the physical host’s.

Edit the “/etc/network/interface” to assign a static IP address:

Move the cable connected to port 6 on the managed switch to port 7, which untags VLAN, before restarting networking (or rebooting the VM) and verify the connectivity to the new network.

Notice that all traffic out of the VM will be directed to the external network except OpenFLow traffic between the controller and the OF switches.

Build the Base Container

This section describes how to build a Linux container, connect it to the network, and install the software tools that will be used for the lab. For more information about LXC, see this guide and my previous blog.

First, we want to disable the default bridge “lxcbr0“ that is created as part of LXC installation. Edit file “/etc/default/lxc-net” and change thus line:

Connecting a container to a vlan network allows the network traffic from the container to be tagged with a VLAN ID. Since we will create multiple containers, each of them will have a different VLAN ID to be able to forward its traffic to a separate switch on the managed switch.

Edit the file “/etc/lxc/default.conf” to change the network type:

Now you can create a container from an Ubuntu template (there are also other templates to choose from):

Executing the command for the first time takes a few minutes. Once the container is created, take note of the username and password that are displayed. You will need these to access your container.

Issue the following command to check everything is okay to run containers.

At this point, we can use the base_container to install the software tools we need then make copies of the container. Note: to use GUI application you will need to modify the configuration file, which is not covered here.

Once inside the container, you can exit using:

Replicate the Base Container

This will create identical copies of the base_container. You will need to edit the container configuration file “/var/lib/lxc/<container_name>/config” to change the VLAN ID and add static IP address. Each container has to have its own VLAN (10, 20, 30, and 40, respectively). The IP addresses can change based on the topology you intend to build but I recommend assigning all containers IP addresses from the same subnet initially.

Before you proceed, make sure that all Ethernet cables connected to the managed switch are moved back to the arrangement shown in Figure 1, if you created VLAN 90, or Figure 3 otherwise.

This completes building the lab. The next section will put everything together and start the first lab experiment.

Let’s recap what we did so far:

If you have followed the steps in this article successfully, you will end up with the network shown in Figure 4.

This configuration uses only three OF switches while the fourth, SW01, is dedicated to the control plane. You can change that by using a a bigger managed switch (12+ ports) to connect the controller to the OF switches and use all four of them to build your data plane topology.

This goals of this section are:

Before you begin, run Wireshark to capture and verify the exchange of the OpenFlow messages. Select the Ethernet interface (ens33) to capture and use the filter openflow_v4.

In a new terminal, run the RYU controller, the FlowManager application, and an application that turns the OF switch into L2 switches “simple_switch_13”.

You will notice the OpenFlow messages log in the terminal and also in the Wireshark capture shown below: 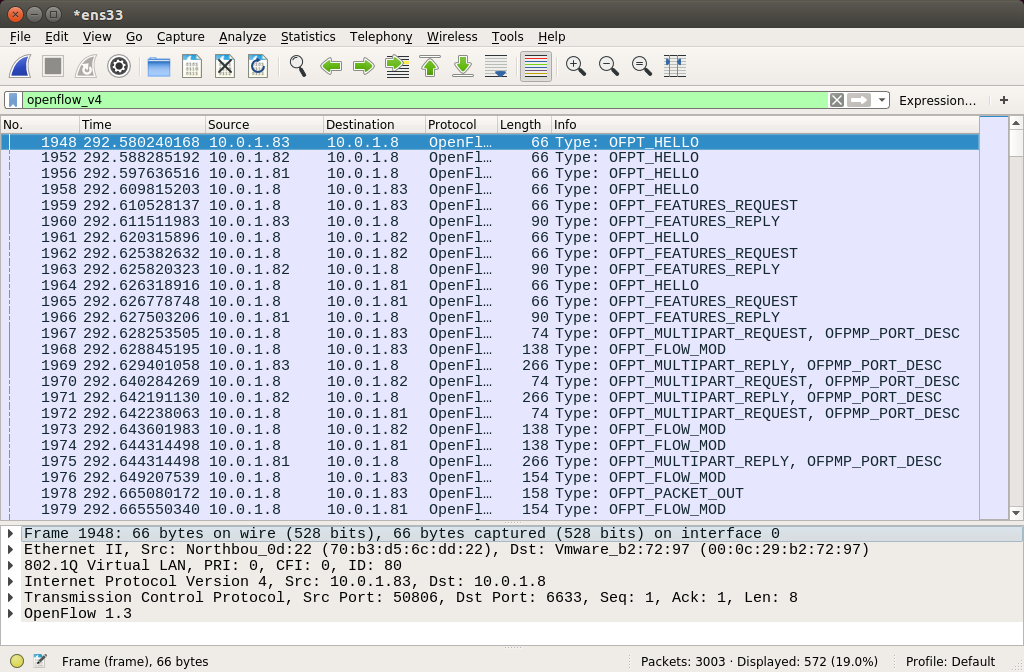 Next, start the web browser and enter the url “http://localhost:8080/home/” to access the FlowManager. The application’s home screen shows information about the switches recognized by the controller. 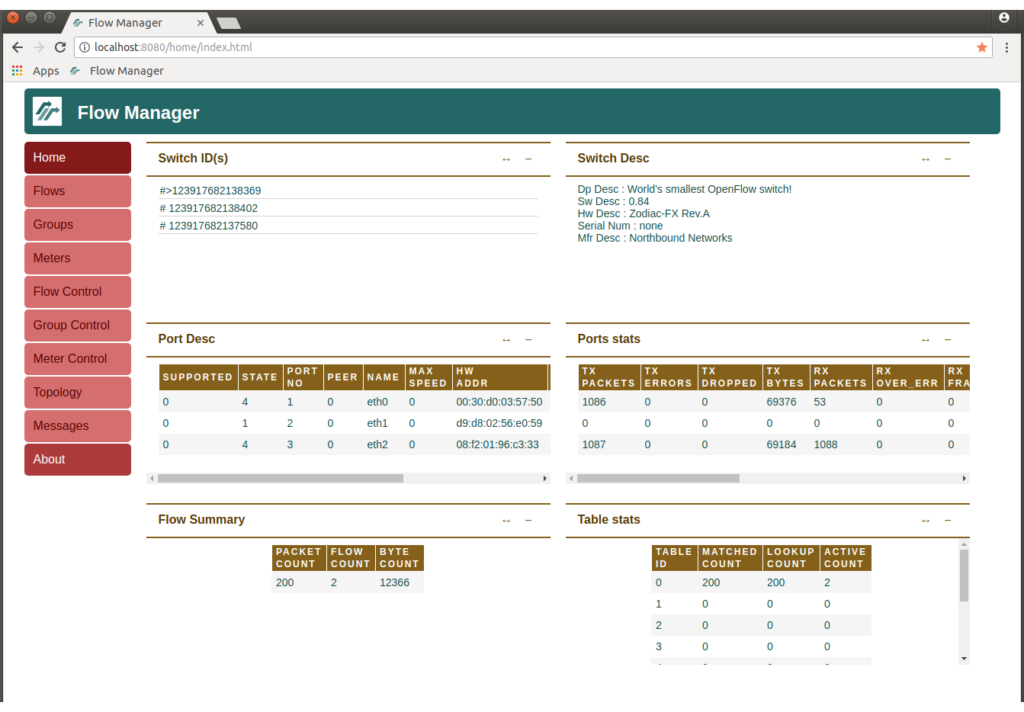 To start the hosts, you need to start each container in the background:

Generate some traffic between the hosts using ping:

Using a different filter, Wireshark will show the ICMP messages: 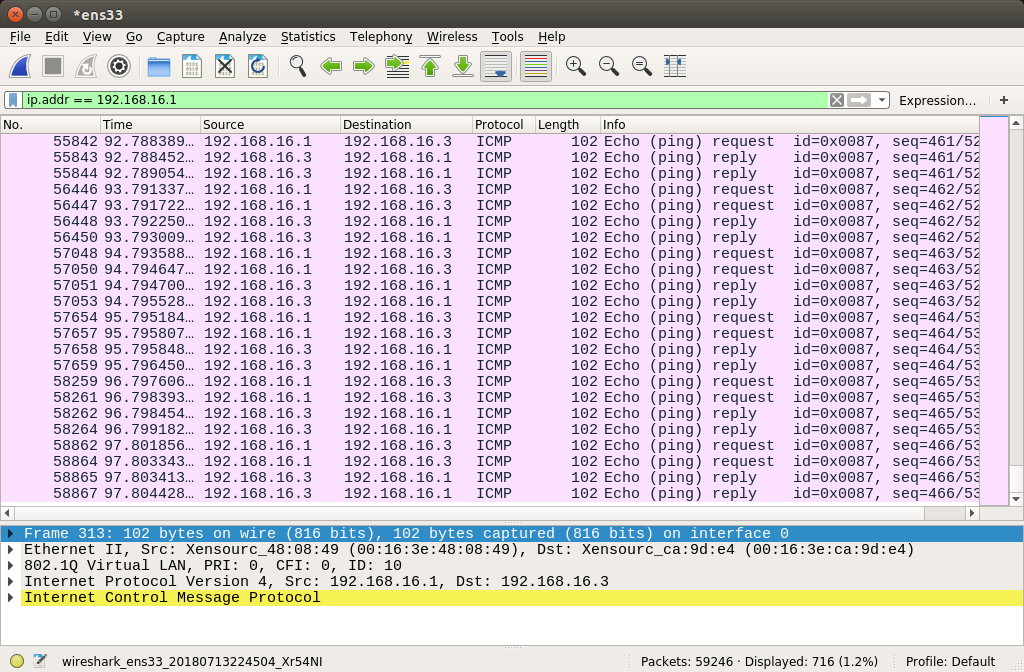 Go back to the FlowManager and check the Flows page to see flow entries being created by the simple_switch_13 application to forward hosts’ traffic. 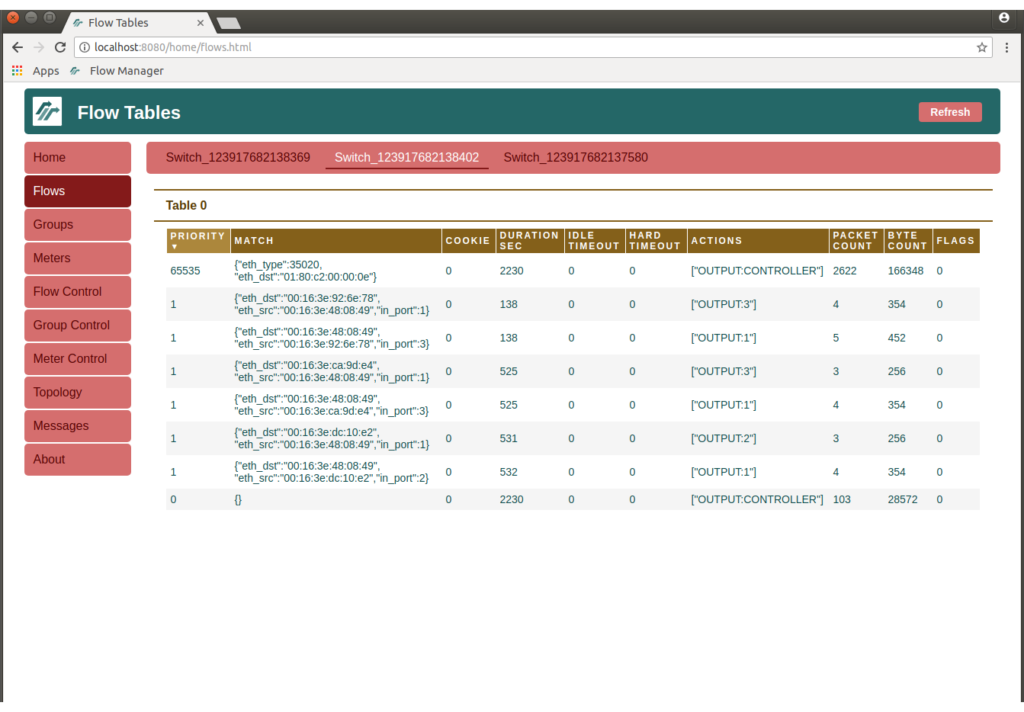 Finally, go to the Topology page and verify the lab topology: 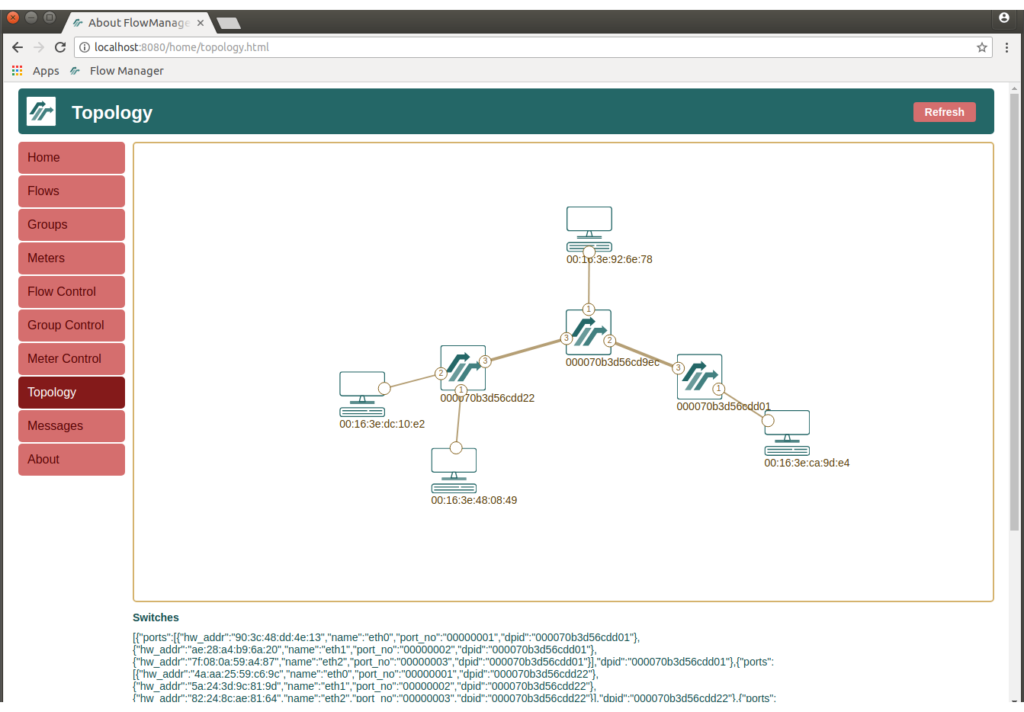 This concludes the lab experiment. Before you power down the VM, shutdown Wireshark and the web browser. Press CTRL-C in the terminal running the controller and stop the host containers:

I hope you have found this article useful.