Earlier this year, the U.S. National Highway Traffic Safety Administration announced it would begin working on enabling vehicle-to-vehicle (V2V) communication technology for light vehicles [1]. This step is part of the agency’s effort to improve transportation safety and it is a signal to the transportation-related industries to begin the deployment phase of this cutting edge technology. 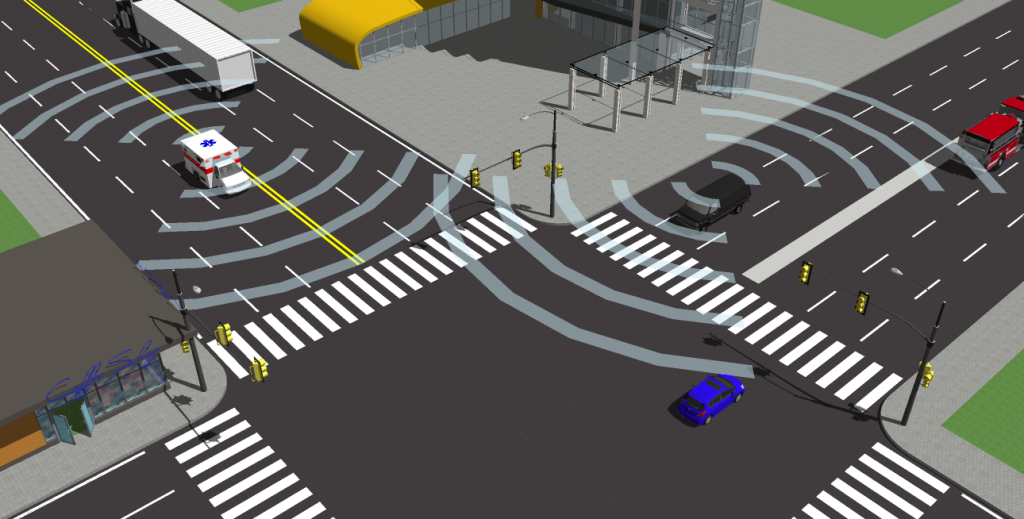 V2V communication is a platform that enables cars and other ground vehicles to exchange messages without relying on any fixed infrastructure. The technology forms a wireless ad hoc network (a self-organized network) among neighboring cars on the road. The cars can use the network to exchange information such speed, direction and other data. V2V is complemented by vehicle-to-infrastructure (V2I) communication that connects cars to devices on the road, such as traffic lights, sensors, or Internet gateways. To cope with the unique challenges of vehicle communication (high mobility of vehicles, longer distances, etc.), both forms of communication use a modified version of Wi-Fi, called DSRC (Dedicated short-range communications). DSRC is allocated a special spectrum in the United States, Europe and Japan.

The recent announcement by the NHTS comes after more than two decades of research and several long term experimental projects sponsored by governments, universities and car manufactures around the world. The main motivation behind this effort is improving safety and efficiency of road travel. Such goal can be achieved by giving vehicles the ability to “see” incoming traffic from around the corner and predict if a car is about to run a stop sign, for example. The technology may also be used to warn drivers about road hazards or incoming emergency vehicles.

The predicted levels of technology penetration will improve the effectiveness of safety applications and will result in more efficient and greener transportation systems. The technology is also expected to have other applications such as infotainment [4]. However, many challenges remain ahead, especially around security and privacy. Will someone be able to track and record a car’s route without the driver’s consent? Will speed limit violations be reported to the authorities? How can all the available information be presented to the driver without causing distraction? Will the driver remain in control of the car? One thing seems certain; we are witnessing the dawn of vehicle communication.