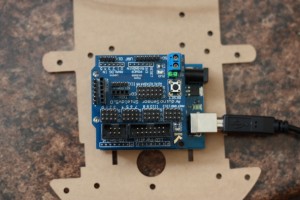 My first step in the assembly is to mount the Arduino card and the Sensor Shield V5 on the top plate and make sure they work. Information about the included Arduino UNO is everywhere but the starting point is always at http://www.arduino.cc/.

The sensor board has no active components. It provides extension pins for Arduino analog and digital pins with extra power and ground connections and some built-in connections for some known sensors and cards. My problem was the lack of schematics or a manual that tells me what the pins are. Finally I found something useful in some sites including this one.

When I tried mounting the Arduino using the pictures of the assembled robot as a reference, I found that some extra holes need to be drilled in the top plate. I wasn’t ready to do this yet, so I just attached the card with two screws in a temporary position for now.

Once attached to the top plate, I connected the Arduino to my PC with the USB cable and ran some sketches to test the card.