The Internet is a network of networks.

ISPs are communication companies that have extended network infrastructure spanning a wide geographic area. ISPs also need to connect to each other to be able reach regional, national, and global customers. The is not different from the way traditional phone companies connect to each other in order to facilitate national and international calls. In fact, many ISPs today are commercial phone companies that use their extensive infrastructure to reach a large customer base. Therefore, the Internet consists of a vast number of ISPs connected in a hierarchical structure in which smaller ISPs connect to a larger upstream ISPs. ISPs may also engage in business and technical arrangements with other ISPs, called peering, to exchange data traffic without charging fees. ISPs requiring no upstream links and connect only to customers and peers are called Tier 1 ISPs.

An ISP’s infrastructure typically consists of a number of a Point of Presences (POPs) that covers several regions. The POP serves as a hub that connects local customers to the ISP’s network. The POPs are interconnected via a web of backbone links that are capable of carrying large amount of data over long distances. Technologies such as SONET, ATM, or Ethernet over optical fibre are typically used in the backbone. 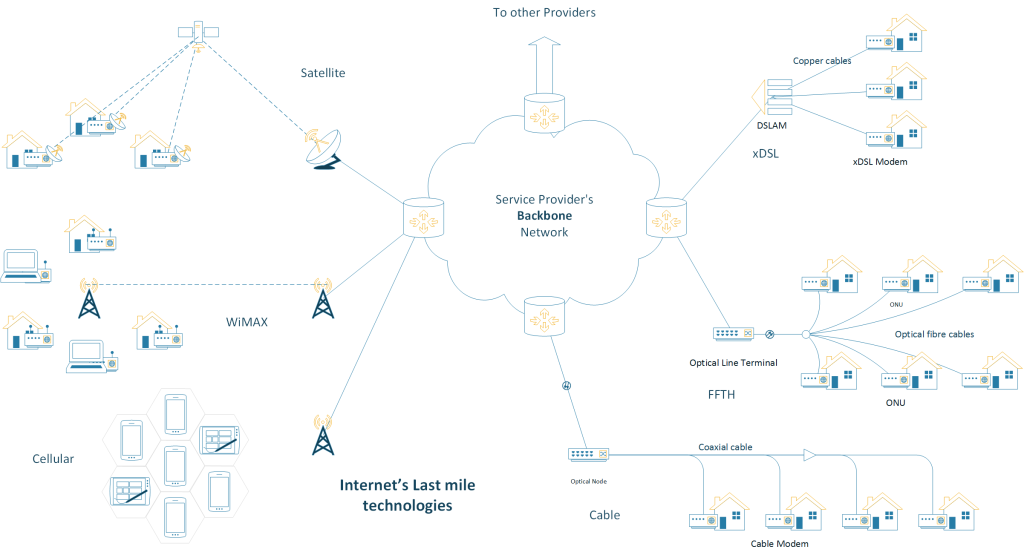 Several characteristics are common among all last-miles technologies, including:

Not all backbones are part of commercial ISPs. Governments, academic, and community organizations also build backbone infrastructure to promote economic development, advance research, or support specific applications. Examples of these networks in the region include:

In the next post: Backbone technologies and the Ethernet